Jack Darius Robson is the son of Andrew Trevor Robson and Linda Louis and nephew to Sadie Robson. He is younger brother to Sabre Robson by one year. His older brother doesn't know him. He was adopted by Jove and Faith Lucas.

He was born a year apart from his brother Sabre, his parents wanted to keep him but a thy months later after he was born monsters attacked his family's house and nearly killed them all but his father managed to drive them off with the help of his mother, they then had a very hard time but about a year later he is left on the doorstep of Jove and Faith Lucas.

A long time after that, Jove and Faith died of cancer and he was left alone, he travelled to Camp Half-Blood where he met his long lost brother, Sabre Robson.

At first Sabre didn't believe it but when Jack saved Sabre's life from a giant spider with is power of thunder he finally believed him.

Like all Robsons he is drop dead handsome, he has bright blonde hair and emerald eyes, he wears a brown jacket ontop of a white shirt and faded jeans. He also wears an amulet that was given to him by his foster father which turns into his spear Solar Flare

He has scars on various points on his body from being tortured by Cesar Osean, lead torturer of Liquid Fire, an organization made by Burning Sun

He is serious most of the time but can have a sense of humor some of the time, he cares about his friends deeply and would give his life for his friends.

He likes using a bow and arrow but when it comes to close quarters he uses a amulet he was given by his foster father which, when gripped tightly in his hand, turns into a spear which radiates a intense light like the sun, he calls it Solar Flare 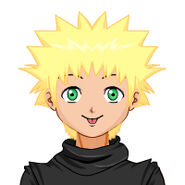 Jack getting ready to fight

Older Jack
Add a photo to this gallery
Retrieved from "https://percyjacksonfanfiction.fandom.com/wiki/Jack_Robson?oldid=113358"
Community content is available under CC-BY-SA unless otherwise noted.