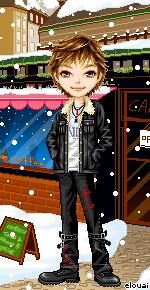 Life As A Single Dad.

Liam takes after his father more than mother. He has medium brown hair and hazel eyes. His skin is more olive toned than his sister's. As a teenager, he likes to go through piles and bags of his father's old clothes and pretty much take them.

Personality wise, Liam takes after his father. He smiles rarely and is very quiet. He's shy and very bottled up. He rarely talks about himself but at times can be reckless and irresponsible. Other than that, he can act very depressed sometimes.

Retrieved from "https://percyjacksonfanfiction.fandom.com/wiki/Liam_di_Angelo?oldid=29146"
Community content is available under CC-BY-SA unless otherwise noted.