Silena is a really smart girl just like her mother and has some joking side from his father. She cares a lot for her family and always protects them.

Silena's fatal flaw is that she cares too much for the ones she loves and would die for them. She also has a hard time accepting that she's wrong, like any relative of Athena, she doesn't like to be wrong.

Silena has immense arachnophobia (just like her mother), freezing up just when she sees a spider or anything bearing a close resemblance to one.

Silena is a fucking idiot has blonde her like her mother, but she has green eyes just like her father. She usually wears green, blue or gray clothes and always carries her bow. She is 5'9. 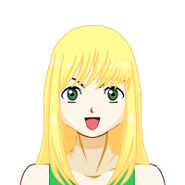 Add a photo to this gallery
Retrieved from "https://percyjacksonfanfiction.fandom.com/wiki/Silena_Annabeth_Jackson-Chase?oldid=180308"
Community content is available under CC-BY-SA unless otherwise noted.